THE EARTH AN IRREGULAR PLANE by William Thomas Wiseman 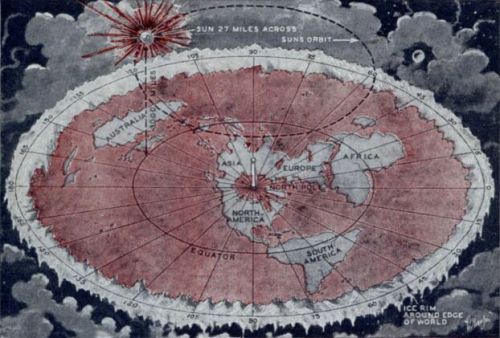 Taken from the Appendix of ZETETIC COSMOGONY: OR Conclusive Evidence THAT THE WORLD IS NOT A ROTATING—REVOLVING—GLOBE, BUT A STATIONARY PLANE CIRCLE.

THE surface of all water, when not agitated by natural causes, such as wind, tides, earthquakes, &c., is perfectly level. The sense of sight proves this to every unprejudiced and reasonable mind. Can any so-called scientist, who teaches that the earth is a whirling globe, take a heap of liquid water, whirl it round, and so make rotundity? He cannot. Therefore it is utterly impossible to prove that an ocean is a whirling rotund section of a globular earth, rushing through “space” at the lying-given-rate of false philosophers.

¶ When a youth, I stood upon the Dover shore of the English Channel, and was told to watch a departing ship. “See! There she goes; down, down, down! The hull has disappeared! She is out of sight! Now, my boy, you have had an ocular demonstration that the world is round (meaning globular in shape), & SEEING IS BELIEVING.” I walked up to an “old salt” who had a telescope, and said: “Can you see that big ship through your glass that’s gone down the Channel, and is now out of sight.” “Yes, my son. Look!” The big ship immediately came into view again, as I peered through the sailor’s glass! “Why! my _________ told me the earth was round, because that ship I can now see had turned down over the horizon!” “Aha! aha! sonny, I know they all says it! Now, I have been all over the world, but I never believed it. But, then, I have no learning, only my senses to rely upon, & I says SEEING IS BELIEVING.”

¶ I now, after many years, endorse the old sailor’s experience, that the world is not a globe, and I have never found the man who could prove by any practical demonstration that he, or I, are living on a whirling ball of earth and water!